Carl Jung and J.Krishnamurti: Truth is a Pathless Land 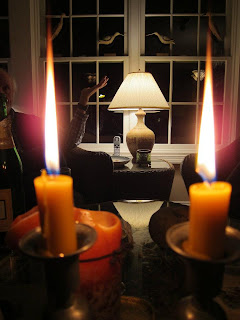 I wonder what brought you to this blog?  I wonder what your story is, and how one or both of these “mystics, madmen and messiahs” may have changed your life. I wonder if you might have a sense that there is something deeply personal in this material for you. I hope so…for it is my intention that this writing might restore in you a sense of wonder and forgiveness: wonder for the wisdom that was shining through their human imperfections and “shadow”—and forgiveness and tolerance, not just for them, but for yourself, and for all who dare to courageously ask the larger questions of life and commit to it with an “unchosen passion.”


I must admit that “Mystics, Mentors, and Messiahs” is a radical title for two men who have inspired me for over forty years. They were two men, who like many spiritual teachers in the 1970’s and 1980’s were put on pedestals and then knocked down years later. Their courageous attempts at earnest self-inquiry, and inquiry into the collective unconscious, not only changed the course of history, but could change your life today, deeply, and for the better. I am committed to sharing their wisdom and passion, as they were committed to sharing what they knew.


Carl Jung was once asked if he believed in God, and he answered slowly and carefully:  “No, I don’t believe, I know.” To truly understand what he meant by that you’ll need to re-open your mind and heart—to leave behind some opinions, prejudices, and even that old “chip on your shoulder” attitude that you may have developed. Why not?


Both of these men were products of their time and culture, and they also transgressed laws and culture norms for their times. They were human, not perfect. People don’t like to talk about the ‘darker sides’ of a great teacher or thinker that they admire. But their brilliance still shines through if we are open to it, despite their ‘shadows.’ We can ask ourselves, why was I drawn to this teaching? When I look at one of Jung’s circular mandalas or listen to Krishnamurti’s talking on freedom, I sense something true in my gut. They have tapped into something numinous, something sacred —a wellspring of wisdom that holds more hope and optimism than I have ever heard.


And what about you? Do you remember them? How did they change your life in ways you barely remember?  Like a song you barely remember from earlier in your life, your connection with either of these sages may have changed your life subtly or profoundly. Their influence permeated the culture of the 1900’s; they were the harbingers of the New Age. Their ideas seeped into our songs, our philosophy, our politics and our priorities.


Their ideas changed our tolerance and understanding for people who suffer from mental illness and soul sickness. They changed how we see ourselves—opening a door for us to think with compassion about our human struggles and pain, not with judgment and demands. Because of them, we no longer bow subserviently to the unquestioning laws of patriarchy, the churches, and institutions that disregard the inner wisdom of the Self.

Because of these men, we ask more questions—and when we have emotional or spiritual problems, most of us will not end up in a mental hospital, but will practice talk therapy (psychotherapy), or will go to 12 step groups like AA (did you know that Jung wrote and influenced the founder of Alcoholics Anonymous, Bill W.?) or we will have the courage to buy a “self-help” or esoteric book without judging ourselves crazy. We are able now to reject what we are supposed to belief and forge our own way—for now we do see, as Krishnamurti once said: “Truth is a pathless land.” Jung would agree, add that you are both the Seeker and that which is sought….the Self.


In these times of focus on science and technology, and radicalized politics, we could use a more balanced spiritual, tolerant and unconditioned approach to problem solving. Jung and Krishanmurti have something to say about that—and they each suffered and sacrificed to bring forth what was in them--despite consequences. They laid the groundwork for such writers as Eckhart Tolle’s (“The Power of Now”), Herman Hesse and others.

But the “story” that has grabbed and obsessed me all these years is not their teachings, but their lives. Their courage and their curiosity.  Their daring to live lives that were shocking then and now, despite the profoundness of their teachings. They would have preferred their lives to be private and secret. But it is out of the stories of their lives, and how their ‘teachings’ and wisdom evolved that has grabbed and obsessed my heart and mind for so many years.


Both men were introverts who would have found honest self-disclosure and comparison with each other, difficult and distasteful. They could be said to have hidden among “words” and dense books…perhaps so as not to be crucified by the scientific rational age they lived in. They were the old guard of this new age, but the writings of these two men men was almost too verbose and overwhelming to understand. Both wrote long voluminous tomes that are almost unreadable by today’s standards, but their stories are similar, radical and revolutionary.


Both Jung and Krishnamurti were icons and gurus of the 1960’s—although both would vehemently protest against that labeling.  Krishnamurti, (1895-1986) who I will now call “K” as he was often referred to by his friends, was known as an “anti-guru Guru” because his essential message awoke us to question whether we needed churches, doctrines, or other people’s teachings to lead us to Truth and Freedom. He abhorred gurus. Yet he spent his lifetime teaching and “shaking us psychically”— pleading for us to become awake and aware of our cultural conditioning that has kept us in bondage—asking us to stop aligning with all sorts of ideologies and ideas that keep us from being free. He didn’t say: you must meditate, you must be a vegetarian, or you must see God a certain way. K was the Guru who said: no more gurus; do it yourself—become free, awake and aware of your own conditioning; He said forge a new trail--whereas Jung said simply: become yourself. Experience the numionus and sacred directly. Find the God within by being truly yourself--ie: “individuate.”


So who was this man, Carl Jung? He was a Swiss psychiatrist, (1875-1961) who was well known for his break with Sigmund Freud. He had a passion for alchemy and astrology, and the idea of what he called the ‘natural man,’ which allowed him to be, with honest conscience, with many women and to see these anima figures as his “muses”. Jung was born twenty years before Krishnamurti (another man who had his “muses” as well.) Jung was married to one of Switzerland's richest women, and had 5 children. Jung, and Jungian thought, especially through James Hillman and Thomas Moore, has regained much popularity in recent years. And now with the publication of his hidden journal “The Red Book” there is a renewed interest in why Jung took his most important book (according to him) and never published it...it was taken out of a locked cabinet in his house and given to the world a half century after his death. This enormous red-leather bound tome of a book has even been compared to the "Book of Kells" for Jung's beautiful illustrations and mandalas.

The “Herr Doctor Professor” wrote this private masterpiece during and after his nervous breakdown, and declares that all his major insights into the collective unconscious came from this delving into his own unconscious process through active imagination. He was his own experiment...he was the "scientist" who drew mostly on his own experiments with himself. I would call this the work of a mystic, an artist, and a rather pedantic scholar, rather than a scientist.


Both men had many similarities…. both suffered from painfully long nervous breakdowns in their thirties, that radically changed the course and teachings of their lives. Both men lived in an elite upper-class society, and both men were idolized, put on a pedestal and most recently, torn off their pedestals with charges of everything from anti-semitism, to womanizing and callousness. Some of these charges are not true (i.e. the anti-semiticism, but others one could make a case for.)


And who was J. Krishnamurti? A child adopted out of India who was raised and bred to be the avatar for a new age. He was raised like a young god or fine racehorse, a person born to be a Star—he was in fact, schooled and trained by the English aristocracy of the early 1900’s to be the next coming of Christ! He was clairvoyantly declared to be the Messiah of this age--but he rejected it, and instead of following the path of the Theosophists, he spent most of his life teaching  how to be 'free'.  That was what he had to learn for himself, and it was what he taught us.

Jung was much more "unchosen"(more about that later) and instead was expected to follow in Sigmund Freud’s shadow, to be famous, and to stay within the boundaries of Freud’s psychoanalytic circles of the time—and mostly to stay away from any ideas about God, the occult, and the "dark mud of occultism". Jung rejected it. In his later years he deeply delved into alchemy, astrology and the world of the Spirit.


So this is a beginning. I do hope you’ll be able to relax your judgments so that you can find the men behind their persona-masks and to see the gold in the shadows of their lives.  I do see them as "mystics, madmen and messiahs" but not negatively. They are the most fascinating people I've known, and sadly I never knew them personally, though they dwell in my heart. I moved to Ojai California only one year after Krishnamurti died there, but although I missed him, I did get to know many of his closest friends and family. I have studied Jung, and poignantly stood in front of the door to his house, but was unable to go in. Above this door it reads in Latin: "Called or not called, God is present." He honored the synchronistic spirit of God that enters into all who enter into relationship with their 'higher power.' He didn't see himself as a Messiah either, but he dwelt in those realms.

My hope is that this blog, and eventually this book, will give you an unexpected joy and optimism and courage in a time when we seem to need it most.  ~Elizabeth Spring~ December, 2012  www.elizabethspring.com and  elizabethspring@aol.com
Posted by Elizabeth Spring at Saturday, December 08, 2012 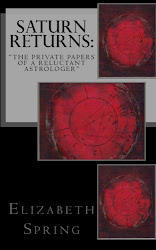 Start at the Beginning!

This blog is the raw material for a new book, and so the first blog post in the Blog Archive is the Introduction and everything follows after it. If you'd like to read it consecutively, follow that first post in the blog archive, then the second, etc. The newest post shown is the latest entry.


My two other books were done this way, and are now available in paperback and kindle through amazon.com. They are: "North Node Astrology; Rediscovering Your Life Direction and Soul Purpose" and "Saturn Returns; The Private Papers of A Reluctant Astrologer." 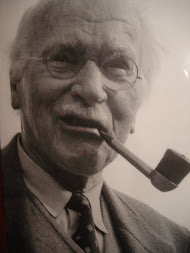